Please Log-In or Register to have access to our FORUM.

You are not connected. Please login or register

ol u rockers out there...

ol u rockers out there... 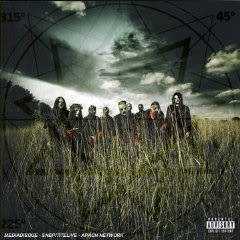 got to tell you bout the new album of slipknot which was recently released last august..their latest album,ALL HOPE IS GONE...HERE are some of the reviews of slipknots albums..
Slipknot has been one of the biggest selling acts in metal since their self-titled debut in 1999 eventually went double platinum. All three of their major label studio CDs have sold at least a million copies. Their brand of aggressive nu-metal coupled with their masked mystique struck a nerve and vaulted them to the forefront of the scene.
Slipknot's last studio CD Vol. 3 The Subliminal Verses found them being more melodic and even acoustic at times. All Hope Is Gone has some of that, but it's a much more aggressive album overall.


The CD gets off to a really strong start with "Execute." It's fast and intense, packed with a lot of anger and aggression. There are several songs in that vein, ferocious with politically and socially charged lyrics. Slipknot also shows a mellower side with mid-tempo songs and the ballad "Snuff."
With nine members there's never a shortage of sound, and producer Dave Fortman (Evanescence, Mudvayne) does a nice job focusing and sharpening the songs without sounding too slick or overproduced. Corey Taylor's vocals range from angry growls to ferocious singing to melodic crooning.
All Hope Is Gone is a very balanced CD. It has plenty of brutality and extremity, but also a healthy dose of melody. There are a couple filler songs, but as someone who has never been much of a Slipknot fan, I was pleasantly surprised at the quality of the album.
(released August 26, 2008 on Roadrunner Records)
so all you rockers out there,go grab some copy of these one of the hell and more agressive album of slipknot...

i got it now downloaded from bearshare!~~

thanks for the info

in the world of rock..they rule!